Posted by: The Editorial Team in General News 3 hours ago 0 5 Views

MEAD Medical Centre in Kalamunda can now boast they employ one of the best doctors in Western Australia.

“I was surprised when my practice manager said she had nominated me for the award since I’ve only been a supervisor for 12 months – and even more surprised when I was told I won,” she said.

“As a mum of two young children and wife to a FIFO husband, juggling home life and part time general practice commitments hasn’t always been easy but I like to think I have become a leader, mentor and role model for a steady stream of registrars at the practice.

“I really couldn’t do it without the support of my colleagues at Mead, who are so wonderful and helpful.”

Alongside working as a part time GP, Dr Hunt-Davies assists three new coming GP’s, or registrars in their training, providing support, guidance and tutorials throughout the working day.

“I try and answer their questions, make sure they feel safe and supported and assess their progress as they move into the general practice setting,” she said.

“Though most registrars have two to five years of hospital experience, transitioning into a GP role can be quite different as there is a lot more diagnosis and trying to understand the symptoms of an initial presentation involved.”

“This year’s winners from Western Australia have truly gone above and beyond for their patients and contributed to the health of their communities,” she said.

State winners are now in the running for a national award announced on November 20. 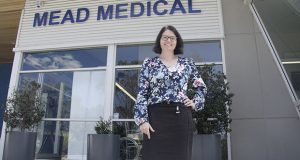 Change of location for Dr Thio

Welcome back Dr Celia Worth

Mead is excited to introduce Dr Aaron Cummings and Dr Sadaf Rasool, both whom are

Welcome to Dr Toby Muia and Dr Vinh Ngo joining our Mead Medical team mid January and farewell to Dr Sophie Norman who will complete her training period with us to move on to the next stage of her career.